WOW! What a Snowball! 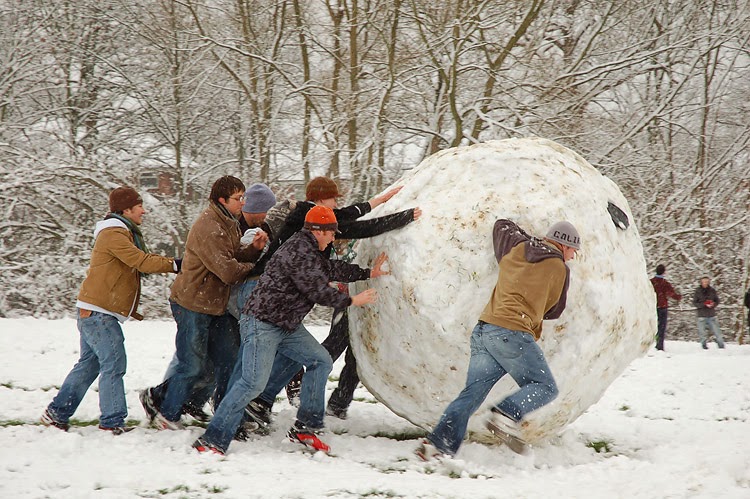 Now that's a snowball!  Once that baby gets rolling downhill, it will take out just about anything in its path. And that's just what you need to take out massive amounts of debt:  A massive snowball getting ever larger, reaching critical mass, gathering momentum while destroying all debt in its path.

Of course, my snowball didn't start off nearly this big.  When I started this debt-free journey with just a small snowball in hand last year, I knew I had a monster-sized challenge...Pay off $177,650 of mortgages in forty-two months.   How does one start?  I started plotting my attack by plugging numbers into amortization payoff calculators like these from The Mortgage Professor:


It's really cool to see what an extra payment each year, or each month, or what an occasional one-time large payment (like a tax refund or bonus or money from selling something) can do to wiping out a mortgage over the long term.  Play with the calculators and see what I mean.  I was convinced that I could destroy these 30 year mortgages (now 15 year) in just a handful of years.  In fact, they convinced me that if I got really aggressive, I could wipe out my $177k of mortgages in less than four years. But how?

Due to the wonderful combination of being both consumer debt free as well as having some additional cash now freed up from paying off our home in only nineteen months, I now had quite a bit more money available to begin increasing the size of my snowball.  My dollars had a noble purpose.  My cold, hard cash would now become a cold, hard, debt-destroying snowball!

In true snowball fashion I chose to pay off my mortgages from the lowest to the highest.  The first mortgage--at the time totaling $49,123--would free up about $425 per month that could be added to the snowball.  Twelve months later, mission accomplished!   (In the spirit of full disclosure, after paying off house #3, I did take a few months off and put the snowball in the freezer.  The payoff effort was intense and I just needed a personal break.)  By April I was refreshed and ready to move on to house #2.  That one was a little larger at just under $55,000 by the end of the year.  We are now into month number 19 of 42.  Where do we stand?

I'm astonished at these numbers!  A few notable highlights:

When we accomplish the third bullet point and eliminate #2's mortgage, that will add another $498.01 to the snowball.  The only problem is that there may be some reduction on the personal income side as our company may loose a lucrative contract and the effects will melt the snowball a bit.  If that happens, I will accept that and adjust accordingly.  We've had a pretty good income this past year and a half and I'm thankful we didn't squander it.  After all, regardless of what happens to our snowball going forward, we are certainly better off having one or two less mortgages.  That's what it's all about:  Remove the risks associated with debt and enjoy the sweet feeling of increased personal financial safety and security.  Let the snowball continue!

How's your debt payoff or investing snowball coming along?
Posted by Pay off my rentals at 5:17 AM

Big snowball. Great job on the payoffs on your rentals. Leverage is nice, but guaranteed income, with less risk is even better.

Exactly! Leverage certainly has its place while one is building up a rental real estate portfolio of properties. But eventually, you want the total piece of mind of paid off properties. Not everyone agrees with that (usually younger RE investors), but I think the older we get and the more economic melt-downs we experience in life, the more we seek safety and protection of assets. Having said that, leverage needs to be used responsibly at any stage of investing.

Four down, four to go.... guess I'll have to find a new hobby after I get the last one paid off... but I won't have to worry about losing my job, that's for sure!

Somehow I don't think you'll have any problems finding something to do with your freed up resources or time. ;-)

I am eager to finish house #2. I think I can pull off one more substantial payment to equity next month as I'm expecting another distribution from my company for 2k. After that I may be back down to normal acceleration. Anticipate a January or February payoff for that property. February is actually the month it was scheduled to be paid off. I may stop blogging at that point as there doesn't seem to be much interest in rental mortgage payoffs. Dividend investing/blogging seem to get all the interest. O well, that will be our little secret. Take care and keep up the great work getting those last four paid off!

That is an intense snowball! I can't even imagine paying down that much that quickly - that's more than I even come close to making! Way to go though - and you're right, it's awesome when you knock off one balance and can add those payments to the next thing on the list. That's when it gets fun watching the number go down!

Thanks for stopping by, brokegirlrich!

It is pretty intense. I didn't get to that point overnight, believe me. But the snowball does grow over time. If I could beef up my frugality muscles I'd be doing even better.

I do like seeing more money going to principle each month. That's like receiving an immediate dividend and thus compounding my payments automatically. It's a wonderful process when you can get it to work for you and not against you.

I'm sure you'll son be able to remove the first 5 letters from your name in no time. ;-)